This land, the passenger station was built on, originally belonged to Albert “Pap” Towle the “Father of Beatrice” His cabin was located on the north side of the land. That cabin was used as a way station, post office, and district court to Beatrice. James” Wild Bill” Hickok would have his famous trial here on the grounds of the museum for the killings at Rock Creek Station. In 1871 Omaha, Southwestern Railroad bought the land for track. With the following year,1872, Burlington bought the track.

Built in 1906 for the CB&Q railroad, the passenger station was the first of its kind. September 27, 1905, Beatrice Daily Express, “Plans have been approved and work has already commenced. The new structure will be one block nearer the heart of the business district then the present station. The exterior will be of pressed brick and stone, with slate roof. The baggage and express room as well as the dining station, will be detached from the main structure. Each will be twenty-seven feet wide by thirty-two long. They will be accessible from the main structure by covered train sheds….there will be a general waiting room and special waiting rooms for men and women with tiled floor and fresco effects. There will be a closed place for carriages in case the weather is stormy and shelter for patrons if required….”

The depot was designed especially for the city of Beatrice by Mr. W.T. Krausch, architect and constructed by Mr. M.C. Anderson of Lincoln. The architecture is described as “Neo-Classical Revival.” This was an unusual procedure, as most of the stations at that time were built from a series of “set” plans. The final cost was $35,000.

The depot used to serve six passenger trains daily except on Sundays. The Layman Room was originally a lunch counter service for the many passengers who would come through. Even William Howard Taft “whistle stopped” here during his 1909 presidential campaign. The passenger seats located in the South Exhibit room comes from the Dewitt Burlington Passenger Depot. The last passenger train came through here February 25, 1962.

The Beatrice Burlington Northern Depot was donated to the Gage County Historical Society on March 2, 1973. Jane Coffin suggested the old Burlington depot would be a good home for the historical society. Her husband Leigh and W.W. Cook, Sr. wrote letters and met with Burlington official to secure the old passenger station. The Burlington-Northern Railroad donated the depot to the Gage County Historical Society in March 1973. However due to the floods of 1973, the museum could not open right away. It finally opened its doors on April 19, 1975. The depot was added to the National Register of Historic Places in 1975.

In 1867 Elijah Filley his wife Emma, their two sons, Fitch and Hiram and his father Ammi came to Gage County. The family lived in a tent until they completed their seven rooms, 1-1/2 story stone dwelling in 1868. They called their new home "Cottage Hill Farm."

In 1874 the farmers were in bad shape. They had two summers of drought, grasshopper invasion, and crop failure. Many farmers were packing up and heading back east. Those that remained needed work. Elijah Filley chose this time to build his barn. The news that Elijah Filley was building a barn spread fast. Men came from all over the area looking for work. Men who lived too far away to drive home each night were quartered in tents.

The stone for the barn was hauled from Elijah's property near Rockford. The lime was hauled from Beatrice. Stone piers were erected to hold the floor joist support beams from the interior. They are two feet square, and the beams are one foot square and extend the entire length of the barn. The main floor was laid of three-inch planks and the floor seams were caulked with oakum, which was then covered with melted pitch. The oakum was made from hemp. All this was to make the floor watertight. The lumber was hauled by ox team from Nebraska City.

By mid-October the walls went up. A row of decorative hand-carved narrower stone was placed around the barn between the lower and second level. The walls on the first floor were two feet thick, and eighteen inches thick on the two upper floors. The haymow floor joists were placed, and the stonework was completed on the tenth of November 1874. The carpenters had the roof plates and rafters cut before the last stones in the walls were laid. All the workers then helped with the rafters, nailing the sheeting and laying shingles. An eight-foot square cupola completed the barn.

The Filley Stone Barn is located at 13282 E. Scott Road, Filley, NE 68357. The barn is two miles southwest of Filley, Nebraska and12 miles east of Beatrice on US Highway 136. Group tours and historical programs can be scheduled by contacting the Museum. Visitors can stop by to see the Filley Stone Barn from the outside at any time. 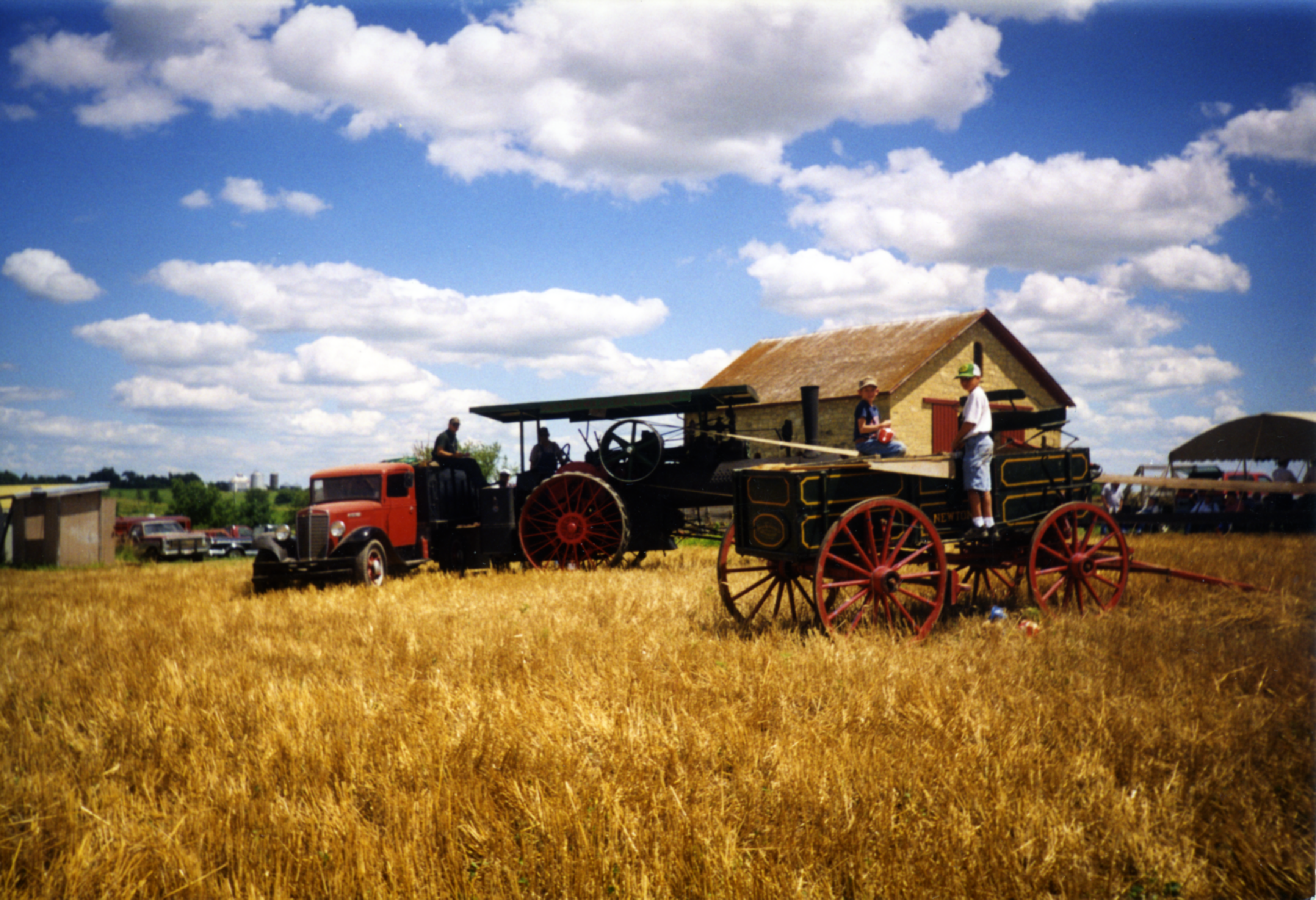 Picture of the Filley Stone Barn during Harvest Festival

The Oregon Trail crossed the southwest corner of Gage County. In the early 1840's, over 300,000 brave adventurers crossed Gage County on their way west.

This triangular stone monument was erected in 1913 by the Daughters of the American Revolution (DAR) near the location where the historic Oregon Trail crossed the border from Kansas into Nebraska. The Oregon Trail Marker located 1-3/4 miles west of Lanham, Nebraska at the intersection of W Stateline and SW 142nd roads. It became a Historical Society property in 1993.

The three sides of the monument read: 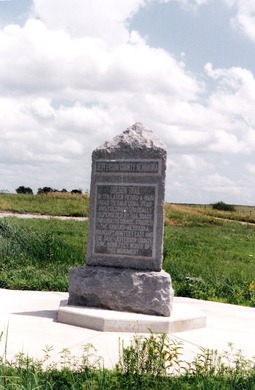